Temple of the Wind God

Things are much improved, but there’s still too much blue. You know what I’m talking about…..

As my daughter Ali and I walked through Santa Maria Magdalena De Pazzis, inspecting our favorite tumbas/tombs for damage from last year’s 2 hurricanes, (Yes!!!! I finally made it home for Thanksgiving), she noticed this view from the caretaker’s building.

oh, yes after all my bitching & complaining the lights are on and we are back to partying @ Paseo Caribe on Friday night. Oh yes.

We are going for it…. Echa Pa’lante!

A month after Hurricane María, I met Angel St. Kitts in Humacao. He showed me his damaged home, and said, “It’s like it was yesterday.” Over the last 12 months in Puerto Rico, what’s changed? What hasn’t? One year later, his story… https://www.cnn.com/interactive/2018/09/us/puerto-rico-maria-then-now/index.html … 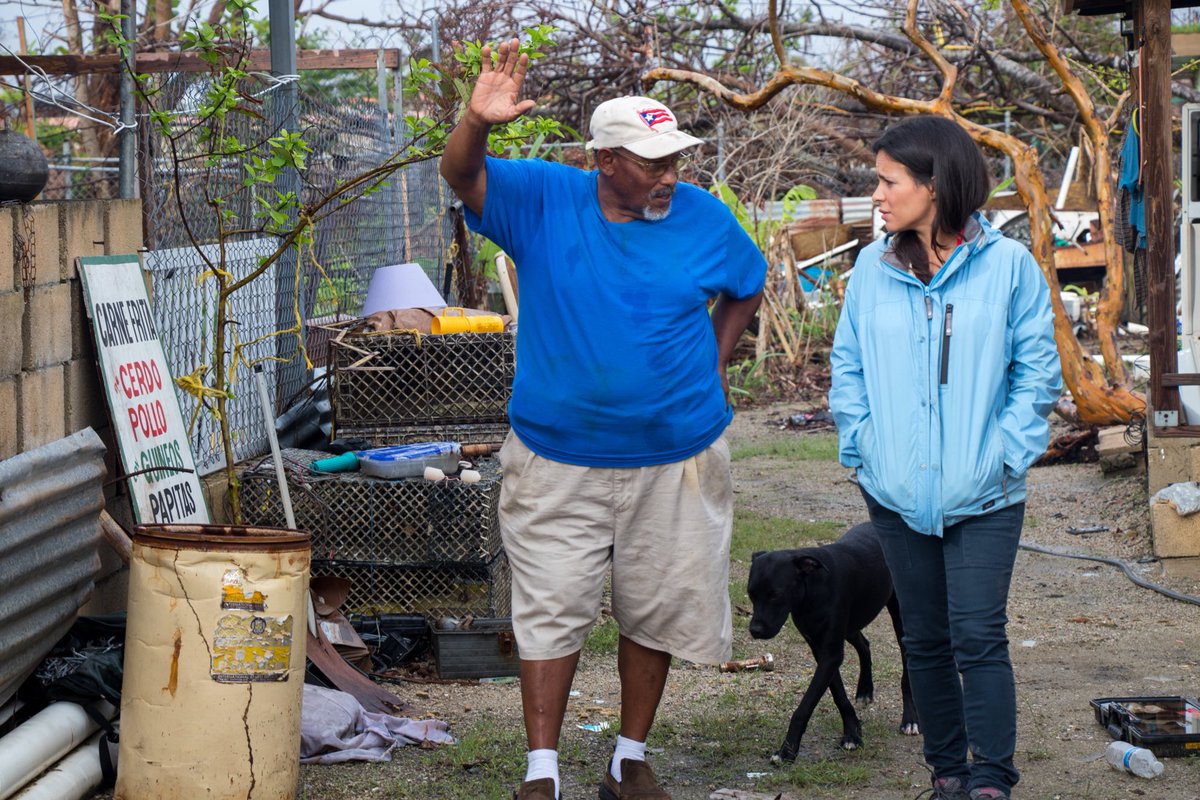 PLEASE WATCH Puerto Then and Now

Somebody tweeted ” what road did you take to get to Puerto Rico?” I couldn’t resist so I replied… she took the long road. How else do you get home?

Homes destroyed by the hurricane in San Juan in 2017. AP

Going through the streets of the suburbs of Puerto Rico or the tracks of its mountainous and coastal towns after the hucarán María of last September 20 a constant vision of the most basic abandonment and the impotence of the people. In the midst of the chaos of communications and the blackout of the electricity system, citizens, politicians, military, reporters felt in gloom a reality that was much more serious than the data that was given by the Government of the island, with the corpses accumulating in the morgues of hospitals. It has taken almost a year to confirm, in total numbers on paper, the human dimension of the greatest tragedy suffered by this country in decades. Today the study commissioned by the Puerto Rican administration to the George Washington University has been published and the result is devastating: at least 2,995 people died in Puerto Rico as a result of the effect of Maria between the day it struck and February 2018. The calculation measures the excess of deaths attributable to the hurricane compared to the average of deaths registered during the same period in previous years.

Until today, the official number of deaths by María was 64. A fact that the government of Ricardo Rosselló has maintained for months without anyone giving him credit. Now the light of the real events undresses its ostrich strategy: faced with the dimension of the catastrophe, they put their heads in the hole as long as possible to lessen the political impact. Although lately they had opened the door to the recognition of what happened. In August, it transpired that an internal document admitted that Maria’s deaths could exceed 1,400. From 64 to 1,400 and, finally, to 2,995. That is: 46 times more than that unsustainable figure. The study also highlights that the evils caused by the catastrophe were primed in the weakest. The risk of death was 45% higher for those who lived in poor communities and those over 65 were exposed to a situation of permanent vulnerability.

Governor Rossello said after learning of the study, in an interview with El Nuevo Día, the main local newspaper: “I am not perfect, I make mistakes … At that time we had a protocol. shortly after it was totally insufficient and this all emanates in that the responsibility of adjudicating the cause of death was of the doctors, but unfortunately there was no formal process to prepare them for a devastation. I had and today we have evidence pointing to the fact that the number at that time was probably greatest “. “This denotes the magnitude of the catastrophe,” he said.

Rossello, harassed by independent estimates that were leaving earlier and pointing to the unreality of the official version, assumed the need to commission this study to the George Washington University and apechugar with the result. Other investigations had yielded the indicative figures of 1,130 dead (Penn State University) and 4,600 (Harvard), but these institutions did not have access to the data of the Demographic Registry, to which the Government of Puerto Rico did not give access until the past 1 of June. His statistical closure caused him to be criticized as the Investigative Journalism Center of Puerto Rico, which was key in the pressure to know the facts. “The government lies and knows it,” Damaris Suárez, a center journalist and president of the Press Association of Puerto Rico, wrote in June. “The irregular handling of the data of the deceased after the passage of hurricane Maria persecutes the Rosselló administration.The magnitude of the problem has increased in the international public eye as a snowball, as a result of the lack of deliberate transparency that, in the case of the dead, he began only days of the atmospheric phenomenon. “

After knowing the data of this study that comes to clarify once the question, the newspaper El Nuevo Día stressed that what happened was “in the midst of an evident lack of preparation of the Puerto Rican and American authorities.”

In the very long delay in knowing the truth, both the lack of political will to organize a truthful and rapid count of the deaths linked to the hurricane and the deficiencies of the administration’s preparation to deal with the catastrophe, and in particular the classification of the fatalities, influenced both. in the short and medium term. The study says: “The government’s official estimate of 64 deaths due to the hurricane is low, mainly because the forms used for the causal attribution only allowed the classification of deaths directly attributable toStorm; for example, those caused by structural collapse, flying debris, floods and drowning. During our larger study, it was found that many doctors were not oriented towards the certification of the appropriate protocol. “This unpredictability is shocking for a country that is in the middle of the hurricane red zone, but more disturbing this other trial of the researchers, which interviewed government and civil society personnel: the emergency plans, they say, “were not designed for hurricanes of a greater than strength 1 category.”

Hurricane Maria was the strongest hurricane in Puerto Rico for a century. the Puerto Rican territory with a category of force four and winds of 250 kilometers per hour, on the edge of the figures of category 5, the maximum on the hurricane scale, leaving the landscape of the island scorched, as if it had been swallowed by a great flare, neighborhoods flooded with water reaching up to three meters high, numerous roads cut, bridges fallen, the electrical network destroyed and a hundred of thousands of homes damaged or in tatters. In hospitals and in the homes of sick people lived some of the most dramatic moments, the lack of electricity to maintain vital medical equipment. The hurricane hit Puerto Rico at the worst moment, with his administration drowned by a public debt of more than 70,000 million dollars and with its economy intervened, as it continues to this day, by a Fiscal Oversight Board appointed by the US Congress, a country of which Puerto Rico is a Commonwealth. The island has demanded Washington a package of aid for its reconstruction after the hurricane that amounts to 139,000 million dollars.

The confirmation of the brutal death toll makes the attitude of the US president, Donald Trump, even more unfortunate. He visited the island a few days after the hurricane. Before the press, Trump said that the official death toll in Puerto Rico at that time -16- was nothing compared to the 1,800 that Hurricane Katrina left in 2005. “You must be proud,” he told Governor Rosselló, in whom those words will resonate for a long time.

Update 11:30am-At the moment we have 14.181 customers without service (amount includes customers outside from Hurricane Maria). Thanks

This was info from yesterday! Ayer

Right now, in Puerto Rico 14,758 customers are without electricity – this includes customers who’ve been without it since Hurricane maria, nearly 10 months ago. Also, now, remnants of tropical storm Beryl are moving across the island. Flash flooding is possible in some areas.

Translated from Spanish by Microsoft

Remnants of @Beryl cause flooding in San Juan. Where’s the mayor #CarmenYulinCruz? Coqui…

This is what is left after the tropical wave passed over Puerto Rico.

So this is what we’re looking like from yesterday to today. At least the power poles are still standing!

FRAGILE. Why doesn’t anybody understand this? Or is it that nobody cares?

Today is 288 days since Maria made landfall and 301 days since Irma made landfall on Puerto Rico. AEE reports that 99.90% of the homes and businesses have power. Unfortunately, that still leaves 1,527 customers without power. Disintegrating Tropical Storm Beryl is swinging by on Monday with rains that could damage the already weak infrastructure.

Puerto Rico Gov. Ricardo Rossello said at a news conference Sunday afternoon that the island could experience power outages when the storm’s remnants passed over on Monday, according to the AP. He also urged people without sturdy roofs to move in with relatives or one of 24 government shelters that have opened. More than 1,500 power customers remain in the dark more than nine months after Maria, and some 60,000 people still have only tarps for roofs.